LL 16
December 23, 2008
Dear Family and Friends:
Well, I know I should be grading or packing or maybe baking but it seemed like a good time to take a break and write to you since I’m thinking about you so much just now. This will be not the usual Christmas letter because you all know what I’ve been up to this past year. What’s missing is what YOU’VE been doing! So, when all the packages are unwrapped, the turkey/ham is eaten and the last “Amen” is said in the last Christmas service, send me a note. I miss you.

This semester, as you all knew, was quite a wild one. Next semester will begin with even more craziness than the previous one but after 3 weeks things will be semi-normal because faculty who have to wait for visas will have arrived. Then, the several courses I’m covering will be turned over to them, quickly! I will begin with 3 sections of Academic Writing, 1 of Expository Writing, and a weekly large lecture of Intro to Lit. When all is said and done I will have just the weekly large lecture and one section of Academic Writing. One of the people coming has his DMA (Doctorate of Musical Arts) and will be forming an orchestra. His plan is to do an evening of Gilbert and Sullivan or HMS Pinafore. That should be fun. I am co-Chairing the Academic Conference with Marlene which takes place the last weekend of March and so far, that’s been a rewarding group of people with whom to work.

At the Christmas faculty staff party I was honored with the Faculty Award for Excellence. It’s a strange feeling because, as the person who pushed to put it in place last year, I am only the second recipient. But, it was a nice honor and Marlene tried to make sure that I and everyone else understood that none of the letters of nomination included “overwork” as one of the commendations! Well, let’s just say it’s pretty easy to appear to be everywhere and doing everything, almost, on a small campus. But yes, I was honored.

I will be moving to Old Town, to a larger and less expensive apartment this break—actually in just a few days. I am looking forward to it for several other reasons too—no smelly hallways, further away from school (close was nice but the change of scenery and the advantages of downtown will be better), a flat rate for rent + utilities, and a small building, 6 total apartments, all owned by one very nice family. So I can get away from the scowls I’ve been getting for the last year and a half just because I’m foreign, have an accent when I say hello or just because I say hello, and whatever else. Lithuania, as I’ve read recently, is one of the most discriminatory countries in the world. Well, I’m not sure I believe that. I think there are other places where it is much, much more difficult, even dangerous to be foreign.

I know, because I’ve heard from several of you, that you wonder what’s going on with my job search. Hmmm….I don’t know much. First, some of the deadlines have just past, I’ve been shortlisted twice and rejected twice. Other searches have been called off because of hiring freezes and then I read an article recently, last week I think, in one of my academic journals about the common practice of age discrimination. One applicant quit putting his date of graduation on his CV. I don’t know if that helped him. Maybe NOT having a date is a big, loud message too. Who knows? I have applied to a number of places where I felt I do fit the job description perfectly. I have also been asked to consider staying on here. Filling my position here is not easy so I would imagine that the date for committing to stay will arrive earlier than some possible interviews.

Charlie wrote a beautiful Christmas note as she always does and reassured me that most of you, my friends are not yet on the dole. That’s a relief. All I hear is pretty “doomy” and gloomy from this side of the world and what is reported from the States. That said, it’s nice to have a job and meaningful work to do, whatever it is.

I have chosen a few photos from the past year to put in a Picasa album here:
http://picasaweb.google.com/gerhen/December2008#
There all labeled. Next year’s pictures will include one of Betty where Marty’s picture is this year. It will be wonderful to have another good friend and professor over here to help.

Sunday evening was our church nativity. I wrote the script and sort of directed it but I should tell you that the cute angels and shepherds more than make up for any of my deficiencies. Click here to see almost everyone involved—and almost everyone was involved. We are few in number right now with a number of people gone for the holidays.
http://picasaweb.google.com/chrislydiabosch/ICFChristmasProgram#
I have been delighted to receive all your good wishes for the season. Thank you. Chad came from AZ State U for the holidays bringing some of your gifts and cards with him. How very lovely. I called him the Noble Sherpa because he carried things for several of us. He has also helped me with recording grades on Blackboard and marking some of the easier papers.
Tomorrow evening I will go to Christmas Eve Mass at Christ the King, a Lithuanian church. I wonder what the music will be like this year? Last year everything was played with a country-western beat after the opening classical pieces. I’ll bet you’ve never heard Ave Maria played with country guitar and boom-chuck drums. Nevertheless, their choir is enthusiastic and sings with joy and gusto. It’s always been a wonderful way to usher in Christmas Day. Christmas Day we will have a big dinner, each of us bringing one thing for the dinner. It will include International Students stuck here over the break, many from Africa.
Best and blessings to you all,
Hugs and love,
Posted by Geri Henderson at 12:21 PM No comments: 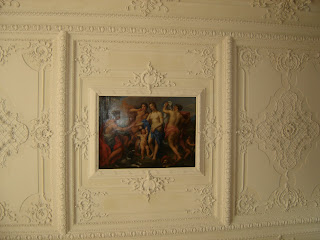