This guy offered to sing for us, his own American/Lebanese version of "No Woman, No Cry" mashed up with "Happy Birthday."  Yes, unique! 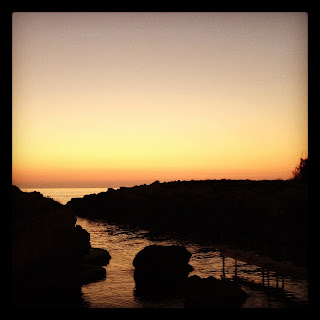 What a wonderful Birthday dinner I had with friends at Jammal's, Batroun, Lebanon! Friday, June 2, 2012

Posted by Geri Henderson at 1:07 AM No comments: Links to this post

Bits of This and That
The title of this post tells all.  That's how my brain is responding to the end of term, unsettling news here and next door, uncertainty about what I will do next--return or sit out a term--and the way all of this and more is affecting us and our students.

When Tripoli, just 10k away from here, erupts in violence, our students are often prevented from coming to classes.  Of course these are excused absences and so the progress of the class resembles the sand prints of a crab, scuttling side to side, but hoping to reach the ocean or the nest.  I'm not sure we've arrived at one place or the other but the term has ended nevertheless and, for good or ill, final exams will take place in the coming 10 days.

"Really?" I said.  "You mean to tell me that "third parties" find it worth their while to come to Tripoli, insert themselves between the pro-and anti-Syrian factions and stir up trouble so the focus will be averted from Syria?"  I have to say that several people are saying this even though it makes absolutely no sense to me.  If no one knows who started it, then how do they know why they're fighting?  But they do fight and people die, and then there are peace demonstrations, all of which indicate that this is not a pressure valve that needs release but rather a lit fuse that slowly inches its way toward the explosive event that will bring the firestorm down on the heads of the Lebanese once again.  People are holding their breath, hoping for calm, praying, demonstrating and talking about peace but the poorest people in Lebanon with the highest illiteracy rates face each other, sure that the other is the reason for all their problems.  The ignored north refuses to be ignored and yet never gets the kind of attention that really matters-- in health, education, proper nutrition that would provide a way out of the cycle.

And what are people saying about Hezbollah in the meantime? The "what ifs" are endless.  If Syria's regime falls, then Hezbollah will have little to control it and Iran's influence in support of it will increase.  Iran's interests are many but in terms of Hezbollah, definitely destabilization of Lebanon and, at the very least, annoying Israel.  Annoying Israel has never been a good idea for Lebanon, caught between these entities, they always lose.

My (very personal, unscientific) opinion is that as long as there is no international solution or will for tough decisions multi-laterally, something serious will occur in Lebanon this summer.  I will not be here but the heat of summer and the definite sectarian escalation next door are angering the parallel sects here.  The Alawite militia, apparently responsible for the massacres of horror in Syria recently are, by association connected with Lebanese Alawites.

Personally, the political situation is not the reason I am considering a longer stay at home.  I have had a second round of severe allergic reactions to...something.  I can't imagine what.  It's been difficult to keep going.  On the one hand, a strong mix of antihistamines will quiet the reaction and puts me to sleep.  On the other, the reaction (uncomfortable hives) doesn't allow me to sleep or do much besides trying to copy.  Either way, it's impossible to work.  I do not have a plan, other than getting back to the States and then seeing what can be done.

Speaking of which, I will arrive on the 26th, June, early in the morning on Amtrak from Chicago.  I am really looking forward to catching up with all of you.

Love and hugs,
Geri
Posted by Geri Henderson at 4:43 AM No comments: Links to this post