Surely there's a post missing! It cannot be that January was my last post! Google, you wouldn't steal my post and give it to someone else's blog, would you?

But, if it's true that you haven't heard from me since January then I'll try to catch up--backwards--so that the latest news is posted first.

My mum's been ill and shortly before our Easter Orthodox break had been in the hospital and extended care for quite awhile.  I could tell that my sisters were worried and very tired.  When I offered to come home for a week they accepted gladly.  The time I spent with my mum was really very good and by being there every day for 5 days I was able to see and sometimes change some things to help her.  My sisters and brothers-in-law and I had several good chats and I asked them for their prayers and advice about what I should do next.  When I had been back for less than a week, I really felt the need to resign my position here at Balamand. So, I have done that and have begun the process of sorting, giving, and selling the things I have collected in 9 years overseas.  By Friday I will have the estimates of shipping costs from two movers at which point I'll probably get rid of a few more things!

From the time I began telling folks, a couple of weeks ago, there has been real surprise and some sense of loss, on both sides.  I guess I managed to fit in pretty well after all.  One of the Deans said, "You can't leave! You're practically Lebanese now!" I take that as a real compliment but I'm not sure I could ever be Lebanese.  It is a difficult culture for a Westerner and even though my Arabic lessons were going well, I cannot imagine ever feeling completely at ease, like on the highways, for example.

Now that the fighting in Tripoli has increased, even more intensely than before, and we know that it is related to the quagmire that is Syria, it is a good time to leave. There is a street in Tripoli called "Syria Street" that divides Sunni and Alawite neighborhoods.  From sniping to rocket-propelled grenades and bombs this week, the area is so dangerous that even the army is unsure they can establish peace there. Of course, to be fair to the army, it does not have the backing of a functioning government so if they are not really welcome and are, themselves, in danger of fracturing along sectarian lines, it is not necessarily a solution.  Given the ineffectiveness of the army, Hezbollah is much more powerful and has created their own "country" within Lebanon, operating where they wish with impunity.  The fact that they're supporting the Assad regime in Syria is applauded by certain parts of Lebanon and strongly criticized by others, creating more reasons for Tripoli to continue to be violent.

My work with the students in the Anti-Discrimination Group has been rewarding this term and I am truly sorry to leave them.  As a young and developing group I am not sure there will be much continuity after I'm gone. Recently, they specifically said they didn't want a student president just yet. I hope I can help them see that this is what they will need for next year.

By now, I'm sure you're wondering what my own future plans will be.  On June 2nd I will begin an online course in "Human Relations" through Chadron University's Certification program.  This 1-credit, 4-week course is what I need to become re-certified in Nebraska for the public schools.  I have heard that they're desperately in need of substitute teachers and that is what I plan to do, once I'm re-qualified.  I will apply to GI Public Schools and Kearney when I get back on July 11th. There are other overseas possibilities too but nothing is certain.  What seems certain now however, is that my years working overseas have almost guaranteed that I am no longer relevant in US institutions.  Academia is a funny (not hilarious, but odd) kind of culture. Deviations from what is perceived to be a traditional academic trajectory are viewed as problems, as is one's age.  We will see.  Nevertheless, I will be happy to be back, close to my family and many friends for awhile. 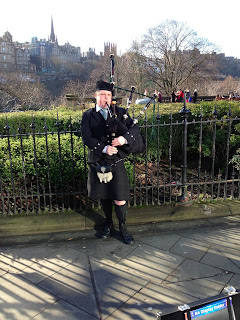 I have not spent the whole year bereft of family and friends.  My little sister and I met in London for my semester break where we spent several days before taking the train to Edinburgh.  There we connected with a friend from our school days in Jamaica and, spending a day at St. Andrews allowed me to introduce my sister to some dear LCC friends who are working and studying there.  What a great trip that was! We were only sorry that my middle sister was not with us, remembering the great time we always have when we travel together. 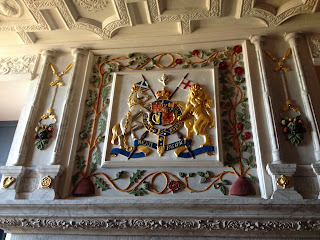 (I wonder why I cannot share some of my best pictures with you? I will have to use Picasa to work smoothly with this blog, I think.) 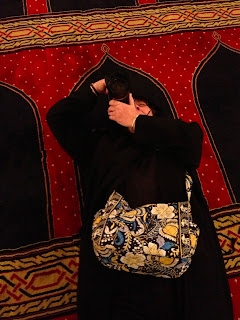 The next treat I had was that a friend from my UNL days came and gave a Writing Workshop and a couple of other talks. She was here for a week and worked hard but we went to Beirut for her last day and a half.  This picture is taken in the mosque downtown where Lydia, who is a wonderful photographer, was attempting to capture the ornate ceiling and chandeliers.  I don't know if she did before one of the caretakers came to tell her to get up!   The minaret outside is just part of the beautiful mosque, the one all the journalists like to have as their backdrop when reporting from Beirut. 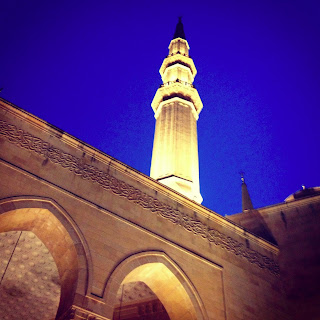 I have applied to the Global Entry System for the speed lane when re-entering the US.  While filling out the forms I realized that in the past 5 years, I'd traveled to eleven countries. Then I was struck by my good fortune--to travel, to see, to learn.  It is such an enriching life and one I could not have imagined.  What a lucky woman I am!

Best and blessings to all of you. It won't be long now before I can see many of you in person!

Geri
Posted by Geri Henderson at 9:00 AM No comments:

It is strange, perhaps, to sit alone in a hotel room in downtown Beirut listening to a Christmas program, sung in English with distinctly Arab accents and still feel the specialness of the season.  I can't shake the feeling though that even without a tree, without friends or family, without warpped gifts, this is indeed a special time of the year.  There are so many wishes from friends and family for a Happy, Merry Christmas and New Year.  Who couldn't be cheered by all those reminders of goodwill and love? The truth is, the gifts I do receive, so thoughtfully packed and sent,  and bring back for family and friends are still appreciated.  They're just not exchanged in the way I used to.  I was reminded today, as I walked to Starbucks, how blessed I am.  I wore a beautiful shawl from my Uzbek "daughter", a gold pendant from my Iraqi "daughter," and carried an iPhone from my Libyan "son." What a rich and wonderful life I have! And all these children adopted me--even more amazing.

For the first time in 3 years I will attend a church service tonight, the midnight mass at All Saints Anglican, in English.  I am looking forward to that so much! The lack of all the things I used to associate with Christmas has distilled the meaning of the season to what is most essential and most meaningful.  Peace and Goodwill to all in this part of the world is more than a nice greeting on a card.  It is life itself to our neighbours in the south, the east, and the north. 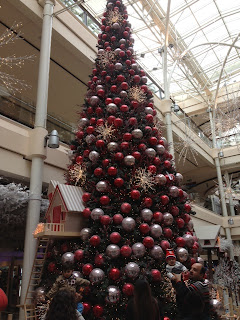 It was amazing to me how fully Christmas is embraced by people of all faiths but I think I understand.  It's the music, the family gatherings, the generosity, and, even the meaning for Christians that is appreciated and celebrated.  I have had Christmas wishes from people of all faiths who seem to understand its importance on a certain level.  I suppose it's a bit like wishing Muslims, "Eid Mubarak" at the end of Ramadan but the celebration of Christmas seems to happen in both houses.  I have done one other new thing this week--gone to a mall for the first time this term.  Because of the Christmas program I've been tied to the campus full-time since September.  My colleague and I hardly shopped at all but we enjoyed being in the mall, seeing the decorations, and being off campus for a bit.  Here are some pictures of the ABS Mall's Christmas tree and Santa Village There was a Santa, Father Christmas, there and a frightened child being held close to the Ho-Ho-Ho-ing Santa for a picture. 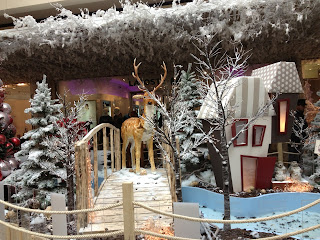 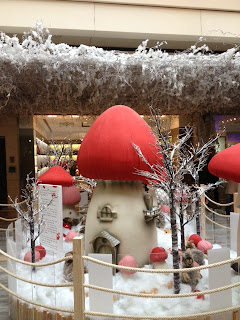 Later, I arrived at church after many "Yameens, Schmels, and Doghris" (Rights, Lefts, Straights) to the taxi driver.  I was early and there were guards standing there from the Lebanese Army.  One said, "No one told us there was church!"  I said, "Well, there is, at 11:30.  I SMS'ed (texted) the vicar."  He replied, "Hmmm...." and "Well, you know, the Christian situation in Lebanon is ... complicated."  I answered,  "yes, I know!"  And we all waited together for others to arrive.  They soon arrived and we went in.  We sang the carols with gusto, there being no other music, we shared the Eucharist, heard the sermon, and found the guards still there when we finished at 12:50 am.  As people left, the guards gradually dispersed.  Peace on Earth.

I was wide awake and so listened to my home church's Christmas Eve service on Skype with my sister and brother-in-law (and quite a few other people too, from what I could hear).  Their music was more professional but no less enthusiastic than that of the Beirut church.

This evening I have made an early reservation at "21" in the Crowne Plaza, a short distance from my hotel.  There I will be treated in the way I have always wished--with deference and solicitude!  Hehe...  And I will be back in my room in time for more Skype calls with family and friends.  In this day there is hardly any reason to be be totally alone!

I will return home tomorrow for a little marking and to prepare a dinner for some foreign grad students who couldn't get home--1 from Syria, 1 from Iraq.  We have been granted 1 extra day off (after our syllabus/schedules were in place, of course) so will start classes on the 3rd. Then there are just 2 weeks of classes left before exam week and a break between terms.

Love and Best Wishes for a Great New Year!


Merry Christmas everyone!
Posted by Geri Henderson at 10:44 AM 5 comments: