The Crucible and Other Tests 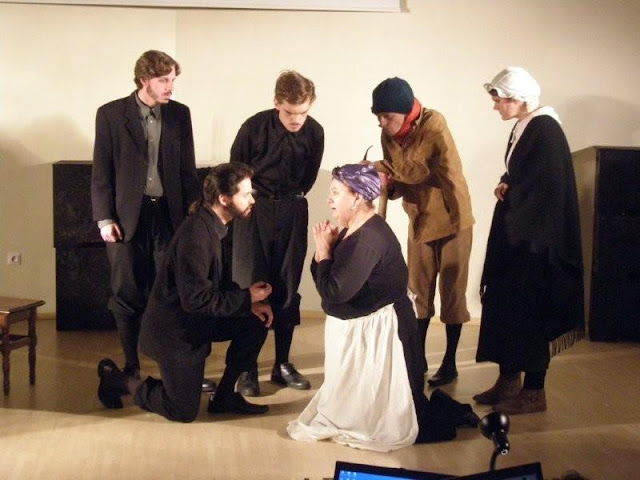 The week I returned was tech week for The Crucible. I checked out the school van for every evening through the final performance so I could get all the students and myself home after buses stopped running for the night.  It had been over two weeks since I'd seen any part of the play and I was very pleasantly surprised.  The night of dress rehearsal was almost frightening because it went so well.  By then we knew that the first performance on Friday evening had already sold out. I was in awe of Dr. Becky Briley's direction--she was always focused, attentive, and handled each actor and their problems with an amazing sensitivity to their personality and needs.  Michele Hershberger, here this year on sabbatical was an experienced, organized and detail-oriented crew/stage manager.  She and her assistant, a freshmen from Moldova, were an incredible team. Ticket sales covered our costs and all three nights attendance was very good being another almost sold-out house on Saturday and fairly full at Sunday's matinee.

As the Barbadian slave, Tituba, a powerful but small part, I could see most of the performance from our front row seats in front of the stage, there being no backstage. Of course, onstage there was little time to think about what other people were doing.  Miller's direction is that poor Tituba must weep as she begs for her life.  This was my first dramatic role so I wasn't at all sure I could turn on the waterworks at will but I needn't have worried.  It was more difficult stopping than starting!

Neufeld Hall, where we performed, is a lecture hall, not a theater, so lighting included two powerful desk lamps pointed onstage to take away shadows for actors upstage.  I have some pictures to share, scrolling along the side of the blog here.  There were two floor trees and then the usual onstage overhead floods. 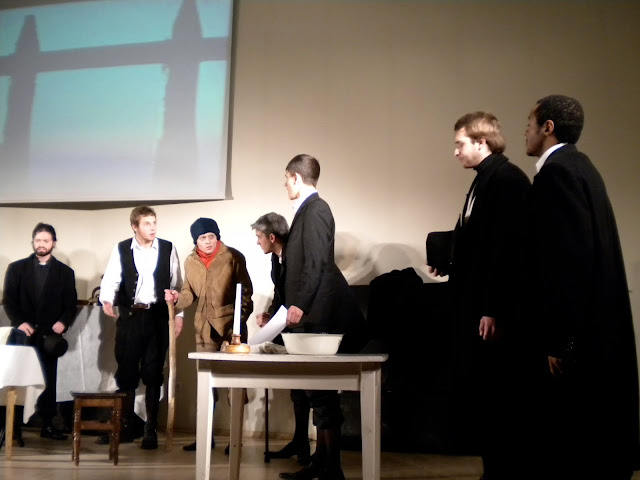 I guess the thing that impressed me most was the way young people from such varied places, backgrounds, histories and accents managed to make a very credible performance, one that evoked great audience response and emotion.  Of course, there were times that the Eastern European English accent made it difficult to understand individual words but that had little importance overall and certainly did nothing much to disturb the powerful effect.  Issues of "witchunting" or demonizing groups of people are no different here than they are anywhere else and, at times, seem more volatile here than in other places.  Long histories of domination, subjugation and totalitarian governments have created a level of suspicion that is still noticeable among even our young people now and no wonder.

I have had more than one student report getting beaten up by one group or another.  Two weeks ago one of my students returned from a Karate competition in Vilnius with a very black eye.  My assumption, that he'd taken a hit during the competition wasn't even close to correct.  The poor guy had been shoved to the ground and beaten up by several guys who were ethnically different.  There is no love lost between Russian Lithuanians and Lithuanians and though our on-campus discussions about multi-culturalism, tolerance, and so on seem to have a lasting impact on our students we have little influence on what goes on off campus.

Classes are over now and I must mark papers--or lose all of my Christmas holiday in guilt.  I will share more pictures and stories.

Love and blessings to all,