A Concert--Real Soul Food!
Tonight we had the Syrian Chorale on campus.  I was in the mood for choral music.  It felt like a choral music night and for some reason I do not know, there are no classes tomorrow--a national holiday?  I was handed a program, all in Arabic.  When I asked, I was told the songs were all Arabic songs anyway.  Oh well, I thought, I've never heard traditional Arabic songs sung by a choir.  I also thought that I might leave at intermission but there was no intermission and I wouldn't have wanted to leave.
What a choir!  They were excellent, mostly acapella, with a conga drum and tambourine, they sang all sorts of things including liturgical, opera, Orff ("La Fortuna" from Carmina Burana), Arabic songs, of course, a wide variety.  One and a half hours passed so quickly!  I was entranced.  Naturally, the better the group, the scarcer the chances of finding recordings.  Example: One miserable pianist we had on campus last fall had a full table of CDs to sell, I saw as I scrambled out during intermission!  I hope I will be able to find this group on iTunes.  Their conductor was wonderful too, of course.
About Shakespeare
We've had a few problems in my English Majors class, Renaissance-Romantic lit survey.  Well, perhaps I should say I've had problems.  My first mistake was attempting to find affordable and reliable texts with good annotations.  Impossible!  My second mistake was in assuming English majors were ready for Elizabethan, and earlier, English.  Apparently some students have already been to the chair's office to tell her that this class is, without a doubt, the hardest class they will ever take in their entire lives!  The funny thing is that she sent them to the English Learning Center (ELC), not knowing what their teacher was up to. Good luck with that, I say. When she discovered what was going on, she was amused to think that the ELC could help and tried to imagine what they would do if the student showed up.  So, I have since been advised that students need modern-day translations.  Translations?  for English?  But of course! English is often their 3rd language. Then, in one class a student asked if Shakespeare was from Europe "somewhere."  Finally, in my last class two students told me that Shakespeare wrote Greek!  I was gullible enough to believe they'd gotten their hands on a strange translation but no, it was Elizabethan English and just as inscrutable as any Greek translation, as far as they are concerned.  We did watch a filmed version together which helped but I thought, even then, that there were all sorts of innuendos and references being missed.  We will go back through the text carefully next class.  Poor students.  Poorer me.  This is definitely a case of misjudging your audience--completely.

A Correction
I was conducting a workshop for faculty on the Moodle--web-based Course management system.  Things did not go well, to put it mildly.  We kept getting blocked attempting to make various functions work.  Afterwards, commiserating with the IT lab person, he told something that was seemingly unrelated.  Here is what E. said:  The picture, below, is a bell--the one we hear frequently throughout the day, echoing over the Balamand mountain, marking the hours of prayers for the monastery.  It is not the ancient idea of a swing!  He said that after he received my first email, he was curious about me and looked over my blog.  Thank you E. for clearing up this mystery! 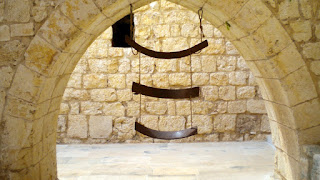 Parking Lines
...merely suggestions that this is a parking lot.  The lines have little to do with car placement.  As a matter of fact, sometimes the lines are painted to make it impossible to use them--as a kind challenge to someone like me who thinks she knows their purpose.  Today I found some that were diagonal followed by vertical ones.  Until we all drive triangle-shaped cars, I can't imagine how those are to be used.

Speed Limits
I have decided that these must be warning speeds, i.e. if you drive that speed you will be annihilated by the cars behind you who are going some 20+ km per hour faster.   I feel much better now that I understand the purpose of these signs.  After all, the purpose of government and laws is to create safety for citizens.  Good!

Hugs to all!
Geri
Posted by Geri Henderson at 6:21 AM