The  school year seemed very, very long--probably because the breaks between semesters and Christmas are so short it is almost impossible to be prepared for the next term, much less rest.  What brought  special excitement to the Spring semester was the arrival of my second guest, Marty Townsend.  She was also a guest of the university and I'm not sure they believed she would really come.  Of course, it was not an easy decision on her part with Arab Spring popping up all over the Middle East.  Even yet, it is hard to tell what will really happen in Syria and what that will mean for us here in Lebanon.  But Marty's visit was a wonderful time for seeing the sights here again, having a close friend nearby, and great chats.  I think I have already shared almost all the best photos of the university and the country, but I added many more during Marty's visit.  Given the fact that her university lecture/meeting schedule seemed to grow like Topsy after she arrived, it's amazing she had any energy at all for sight-seeing.  The day we attempted to drive up into the mountains was the only day we didn't accomplish all we'd planned.  We had gotten a later start and, I must say, it is not easy to be a passenger.  There is no way to believe that the driver can gauge the distance between herself and the edge of the road and the breathtaking drop below.  I have sat in that seat!  Finally, Marty said, "Is it just gorgeous landscapes and charming villages all the way up?"  I said, "Yes."  She said, "Let's turn around and go back."  She was here more than a week and it was good to laugh and have company.  We spent a couple of days in Beirut before she had to leave.   Two weeks after she left, the semester was over and I went back to the States for a nice, long visit (June 21-Sept. 12th).

Below: Some new pictures, taken when Marty was visiting

These were taken on the tour Samir, a colleague, offered to give us of Tripoli.  Just about every other person in Mina, a coastal city adjacent to Tripoli, greeted him personally so that we began calling him the Mayor of Mina.


Here are more pictures of the Monastery and a lovely restaurant we like because of the setting. 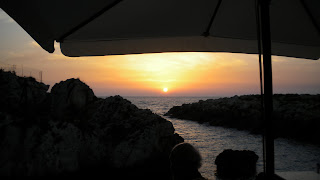 Within 24 hours of arriving in the States, I had decided on and signed papers for a car, thanks to the help of a friend who really gets a kick out of shopping for cars.  Can you imagine?  By the time I arrived, she'd parsed the market (not so good for used cars after the "Wreck-the-guzzlers" program, or whatever it was called), had her favorite dealers and salesmen chosen, and was able to show me the best choices within 2 hours or less.  And that, my friends, is how you buy a car!  It has been 7 years since I've had that kind of freedom and independence and I made very good use of it, driving all over the Central States: Colorado, Kansas, Oklahoma, Missouri and back to Nebraska.  What fun it was--really!  A stack of good books from the library, good music, and the open road not to mention all the new things I could really appreciate: Drivers who use lanes and signals, who observe the speed limits (mostly), and who stop and start in predictable ways.  Driving up and back to Steamboat in CO helped me understand the huge difference between mountain driving there and here.  Oh my!  No wonder my guests have been scared out of their wits.  In Colorado there are four-lane interstate highways in the mountains! Amazing. My guest last year, Marlene, replied, as I tried to point out scenery, "NO!  I can't look.  I have to look at the road because you're not!"

But, most amazing of all was that I found all my friends, right where they were supposed to me, usually. Even getting lost is not a big deal these days with cell phones.  I must say though that was a bit disconcerting to call my Tulsa friend and say I didn't know where I was and have her tell me she could see me out her front window.  I think a GPS is in order for the future.  After driving with friends to Chicago for a wedding, I am convinced that is better than sheets of Mapquest printouts flying all over the car.  I was fascinated by it and, because they let me program it, I set it with a British accent and started calling it The Road Nanny.  That has a comforting sound to it, doesn't it?  I mean, how far wrong can you go when the Road Nanny is telling you what to do all the time?  Perhaps I should have stapled all those Mapquest papers together in groups for the various destinations, or something.  Anyway, I had a wonderful time and had the bonus of seeing even more people who happened to be around when I arrived.

Other than my Great American Road Trip, I stayed with my sister and her husband Murry, except for a few nights in Lincoln with friends.  Since I don't get to church here, I went to church at least twice and sometimes three times on Sundays. (I know, there's a monastery and church part-way down the mountain but it's all in Arabic and Greek and the monks sing monophonic, off-key chants.  I really don't think God is upset with me for staying home from something I can't understand or appreciate.)   I wasn't really trying to do make-up work but I did enjoy playing and attending.   It was also very good to be with family and friends for several weeks.  Besides the lack of close friends here, I find Balamand to be very isolating in ways that Beirut is not.  One does not "go for coffee" with friends, or to the mall, the movies, or anywhere on the spur of the moment and I can spend consecutive days at home, never seeing another soul, when there is no school.

I have taken up my violin again, almost every night, and so far, the neighbors have not complained.  The truth is, I hope they're not hearing it!  The endless repetitions, the finger-slides, the pitch-adjustments.  Good grief, and the out-of-practice vibrato that is none too reliable.  It can't be good.

Next week classes start in earnest.  No one can really tell me why we have a bogus half-week of classes, no teaching this week except to say that 20 years ago, they did it that way for the sake of their unautomated registration.  Oh well, I discovered that I have a good schedule and a private office so, for the most part, I am and will be ready to go on Monday.

I describe, in the post of August, a couple of incidents from last spring that are unique to this culture.

Blessings and Hugs to all,