Christmas Break
Yes, it has been since well before Christmas (October) that I have updated this post. I sent my household things to S. Korea, while I traveled back to the States for the Christmas holidays--3 weeks-- to visit my mother, enjoy family and friends, take care of some medical things, and have a good time in general.  I did! I also needed to fill my nearly-empty suitcases with some winter clothes.  I finished marking, grading, and recording grades on the long trip home and then could look forward to the music and services, and some of the social activities of the season.

Arrival in Seoul, Inchon Airport, and Apartment
I had a weird return schedule since my Christmas break trip had been booked ahead of my new appointment.  Therefore, I had to fly back into Okinawa, spend the night, and fly to Seoul the next day.  In the end, it was a good idea. A van driver picked me up and took me to the Dragon Hill hotel on Yongsan base since it was the weekend.  The R&R at the Dragon Hill was welcome.  It looks quite a bit like a Marriott; I'm sure they're related.  I was very disoriented, not realizing I was in the heart of Seoul and would be living right next to the base, almost.  After a couple of lazy days there and my last look at television for the next 4 months, the local rep picked me up to show me around and help me get my previously mailed household things to the apartment I would rent for my time here.

To say that I was dismayed is probably an understatement!  But it was clean and that's absolutely critical.  It was also easy to see that the landlord, Mr. Kim, was very accommodating and anxious to please.  The disappointment was in the discovery that my windows are all frosted, there being zero view.  Furthermore, there was a lovely desk and office chair, a kitchen table and 2 chairs and that was it for anywhere to sit, other than on the bed.  But, that was not the worst discovery.  Opening the door, a horrid odor hit us and wafted into the hall!  Yuck.  Mr. Kim was apologetic and over the next several days explained that he couldn't find the source.  However, we eventually discovered that it's coming from the drains, especially in the tub.  Making sure that they're closed unless in use, is the only way to be sure it is tolerable.  I have also left one window open, except when another horrible odor comes in from outside--the smell of sewage!  I wouldn't speak of the whole of Korea but this area of Seoul seems to have a real problem.  There is almost no day on my walk down the hill from the neighborhood and up the next hill to the base that I am not running the gauntlet of garbage piles  in the streets, much of it uncovered.

There is a huge positive about this place however.  It is small and can be cleaned, top to bottom in an hour and a half.  Also, the university has purchased a recliner that fits in the study room and Mr. Kim brought a side table and lamp so I now have options and a comfortable place to sit when I like.

Classes
Because of the military tuition assistance schedule, the first term at UMUC was delayed by one week in Asia, perhaps everywhere, shortening the term from 8 to 7 weeks.  Then, at Osan Air Force Base, the annual exercises were scheduled for the final week of classes further shortening the term to 6 weeks.  The resulting classes were about 4 hours in length requiring some highly creative methods for keeping us all alert, me teaching and them learning.  I was just getting the hang of managing ways to teach within 8-week terms.  My Osan students and I survived in fairly good shape, none the worse for wear in the battle to finish.  I have just completed the 7th week with the Yongsan class and, within 48 hours will have a about 8 days break before Spring II term starts.  While I can extend class times to satisfy the military requirements of face-to-face time, abbreviated schedules have two rather major drawbacks: I have half the number of weekends for marking and worse, students have half the amount of time for study, even less than that given their grinding work schedules.  I think the general attitude of the all-male class in Osan is that they were "cursed" with a half-crazed professor who seemed to race ahead, and then turn around and jerk them forward --a very ragged approach to what should be a solid foundation for future college writing assignments.  Never mind.  We all did our best and, at our final wrap up class, I was presented with one of the nicest expressions of appreciation, this card they'd all signed. 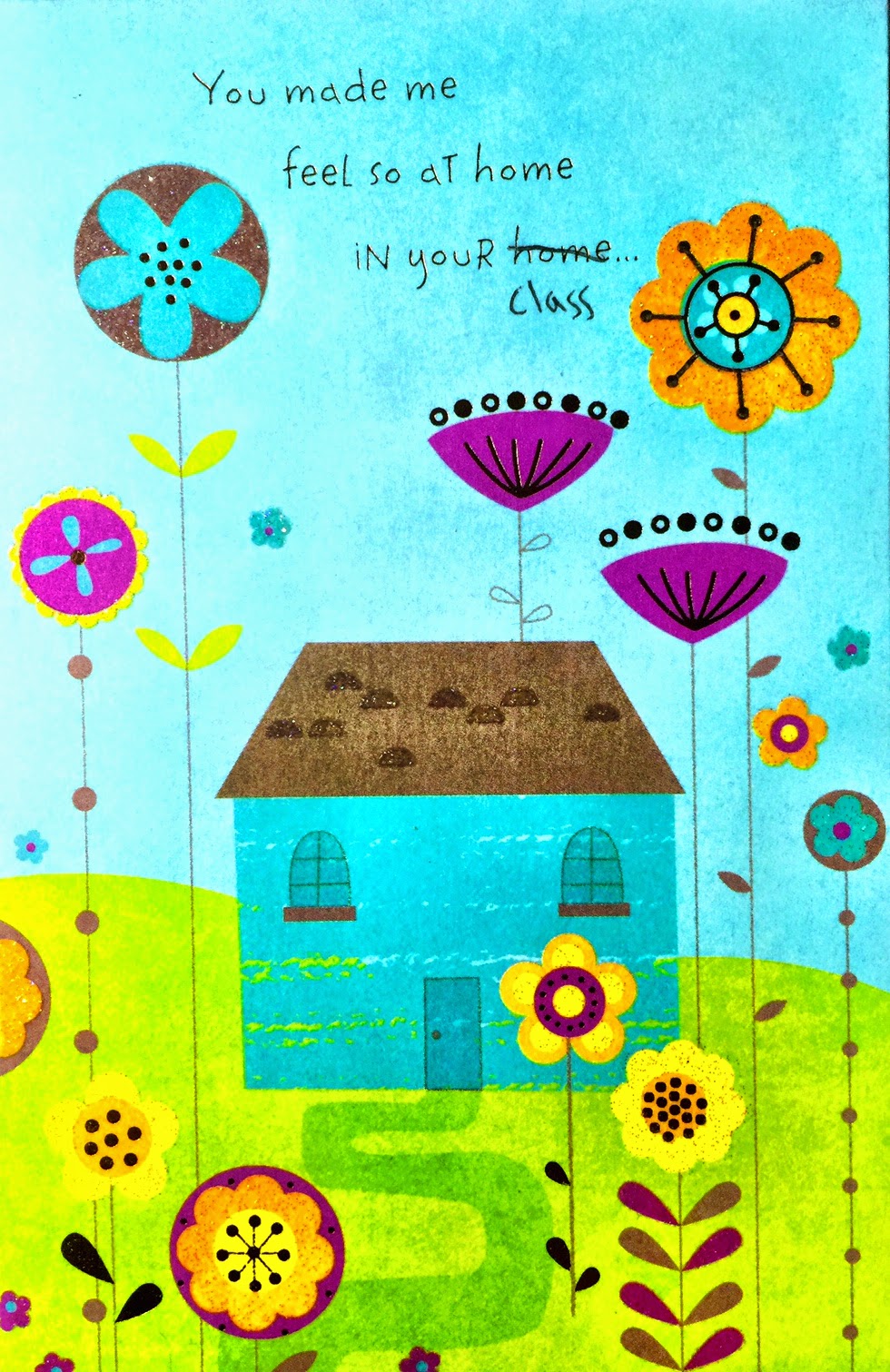 Perhaps it was a consolation card. "See! It wasn't as awful as you thought."  Anyway, I made sure they knew how much I had appreciated their hard work, their willingness to suffer the lengthy classes, the piled-up assignments, and other hardships.

For the Yongsan class, there was a different dynamic altogether--probably the result of the 4 girls in attendance of whom 3 remained by the end.  Even so, there were several in both classes who just couldn't manage and had to drop out.  This represents real difficulty for the young men and women (and even those more mature students) as they have to repay the $600+ for any course that is withdrawn or failed.

Over time, I've realized that my teaching philosophy is not a static document. As I approach what may be the final 15 years of this particular career I have decided that there is nothing more important to me than seeing students succeed.  Curve? I don't believe in it.  I want to teach and if students want to learn, then "let's find a way to work this out so you can be successful" I tell them. I'm way past being naïve about this however.  I've had students this past year who were not motivated and who didn't want to share equally in the process. Given the military system, they can withdraw up until the final week of classes and they usually do, knowing that a half-hearted effort will not be a passing grade.  When the dean questioned my above-average grades I said with a smile, "That is because I'm a good teacher and these students are motivated.  The ones who aren't, who would give you the 'balance' in the grade sheet you want, are already gone."  Overall, however, the S. Korean grades will not be as high as those in Okinawa and I'm not sure why.  I was warned about this from other faculty though many of their dire warnings about work schedule interference and general attitudes and effort were not in evidence.

Culture and The Arts
It took me at least 2 weeks to realize that, being in Seoul, there were probably cultural events I should attempt to find.  The search term "concerts" revealed a full calendar of rock concerts but not the orchestral, chamber, or vocal concerts I had hoped.  An "arts calendar" led me to the SAC, the Seoul Arts Center, which has become my home on most Friday evenings.
I begin my evening at one of these two restaurants as they are generally quiet and have good food.  Then, I walk around, inside SAC to the galleries and shops, always stopping by the ticket booth to find out what is on offer in the next month.  This Friday I will attend a violin concert in the lovely chamber concert hall, attached to the large hall in the complex.


This sheet music shop is one of the most amazing I've ever seen.  It is beautifully organized and has every score one would usually have to order at most other places.  I wanted to buy some music but, there is no longer any need, unfortunately. Still, it was tempting, just because I could.  SAC has a conservatory on its campus as well as an opera theater, the large concert hall below, the chamber concert hall, and one other I've not seen.  I have a ticket for Aïda next month.  Musicals are in Korean but, looking over the soloists for Aïda it's clear it will be in Italian, mercifully. The SPO--Seoul Philharmonic Orchestra is world class!  It has been years since I've heard an orchestra with the kind of range this ensemble has.  I am delighted every time I go by their artistry, the soloists they feature, the guest conductors, the enthusiasm of the audience and the wonderful programming. Since finding the SAC, I must say that the quality of my life has improved tremendously!

I believe I have established some of the differences between my experiences in Okinawa and Korea.  Other things to note are that while the Japanese demonstrate unfailing politeness, the Koreans are much more aggressive.  For shopkeepers, people at the salon, and some waitstaff in restaurants, it is normal to be accosted and asked directly if one wants more or anything at all.  It seemed to me that the manager of the salon was clearly disappointed on Friday that I hadn't planned to spend the morning and all my cash in his establishment for every service they offer.


Next Week
We have next week off and so tomorrow, I am going to the USO to see what tours I can fit in this coming week amidst preparing for the next two classes, which will run for all 8 weeks this term. For the first time in all my professional life, I have  completed all my grading  with exception of 2 students who are working hard to finish.  I am not under any delusion that I have cracked the code of quick marking however, but rather understand that I had a larger than usual attrition rate this term with 12 in each class.  What a huge difference that makes.

One tour that is apparently a do-not-miss for historical reasons, is the tour to and of the Demilitarized Zone, the DMZ.  I will go but I am most anxious to see some truly Korean sights and perhaps taste something other than kimchee, a national dish for which I have generated little enthusiasm.

I will return to the States on the 9th of May, having sent my things on to the next posting, as yet unofficially announced as a return to Okinawa.
Posted by Geri at 7:42 AM