Okinawa
I returned to Okinawa, to the apartment I had so enjoyed before and, by a strange fluke, based on the strangeness of UMUC scheduling, was able to stay put for over a year! Of course, the fact is that the longer a popular professor is in place, the more students will sign up for her classes. It doesn't seem to make much difference to the administration, however. The craziness of moving one English/Writing prof out so you can move another one in, doesn't make any sense to us faculty--financially or professionally--but, in hiring, they sell "the experience." It was really comfortable for me to return to Okinawa and saved on my emotional and physical stress too. My Japanese, however, did not improve one whit. The likelihood of being transferred to Europe destoryed my motivation, I must say!

Germany
Finally, in August, I was able to relocate in the European division and began teaching in Germany that month. There is much less administrative support in Europe. I'm not sure why. Faculty have formed a closed FB group where they ask each other questions and about all sorts of things--purchasing cars, finding apartments all over Europe, administrative puzzles, and so on. However, I found the lovely apartment I have lived in since September. It is spacious, costs less than 1000€ with the Internet and all utilities included. But, that's not the best thing! Let me introduce you to Lili and Karl, my Vermietere (Landlords). Lili now calls me her "Schwester" (sister). She says she's never had a sister and now she does. They live "oben," above me in a big old farm compound with a courtyard that is already being re-beautified for spring. I am frequently invited up for coffee or even lunches, their big meal of the day. They have made a huge difference in my German since neither of them speaks English. But I also very comfortable here and they have gone out of their way to do many things they know I might like--such as clearing out the picnic area so I can park my car there in the winter. Lili does the cleaning which, she says is her "duty" but I rather think she doesn't trust anyone to clean like she does and, from what I can see, she is right. We live on the main street of a little town near Ramstein and my front door is barely 3 feet from traffic. She cleans the steps, the windows, and the door because the exhaust discoloration makes her crazy!

This month, when I left for a week to visit my mum in Nebraska, Lili said she was sad and lonely. It was too quiet. Generally, when she needs to tell me something, she knocks and immediately says, "Ich komme" as she walks in. That might make some people nuts but I live alone and it's usually fine.

The house is a large, old farmhouse with a courtyard, a huge vegetable garden, a large cellar, a very old stone grain mill, and other out buildings. Unfortunately, Karl was just taken to the hospital tonight and Lilli and I discussed the fact that at 80, he should probably slow down, get someplace smaller. I've never seen Lilli so close to tears. I feel sad for them if it comes to that. They love this place, all the flowers, fruits, berries, vines, vegetables. As you can see, the courtyard is beautiful. 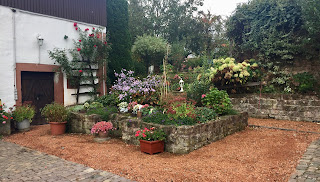 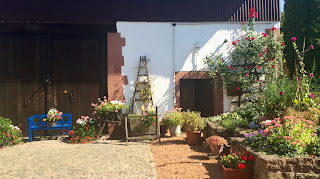 Idiosyncrasies?
I am sure some of my friends have questions about my speed on the Autobahn. There are not that many places, where I drive, that the speed is unlimited. When it is, I do about 100 mph, 160 kph in daylight and 140 kph in the dark. There can be absolutely no inattention at that top speed, of course. Approaching slower traffic from behind comes much more quickly. No wonder car inspections here are such a big deal. Older cars like mine must be tested every year to meet German road standards. Good brakes are essential, as are good eyes. My assessment of road safety in Germany is that it is safer than it is probably anywhere else. The safeguards are numerous. The warnings in and around work zones are longer and the space allotted the workers, greater. Speed cameras, not police cars are usually the methods speeders are caught, tickets arriving in the mail. Most can spot the cameras right away but I've never seen even one! It seems to me that of the hour and a quarter it takes me to get to Wiesbaden every working day, only 30 minutes, at the very most, is unregulated for one reason or another and when it is, the speeds are quite a bit slower than in the US.

I returned after hmmm...let's say, several? years (more than 30) to my study of German when I came. I really enjoyed it and managed to quickly remember much I'd lost. After 2 semesters however, I had to take a break. Prepositions and the grammatical rules around them caused a pause. I plan to pick up where I left off in the summer, while I'm in Nürnberg when I'm teaching only 3 days a week. Today, Lilli invited me up for coffee and cake with their long-time friends. I was able to hold my own and realized, I'd learned more than I'd thought, a real accomplishment.

For people who've followed this blog awhile, you will know that I have discussed ideas of service here before. German ideas in this area are similar. I teach business writing sometimes where we talk about "tone" in writing. There are certainly no worries about this in the German culture. Like it, lump it, or forget it! When I first moved in, I had terrible problems with the wireless connection downstairs. My German does not include a bunch of technical words and I was so sure that it was the company's fault if only I could communicate with them what the problems were! However, there is a sweet neighbor who has fairly good English. Even she was swearing before it was over. In the meantime, I was driving to the air base to sit for hours in the cafe lounge where the Internet is stable and reliable, one of the few places I know. The situation between my neighbor and Vodafone became so rancorous that the company just cut off our service entirely (not that I noticed, of course)! It was a month + of calls to the company that produced nothing until finally, they scheduled a technician to come with the dire warning that we would Pay, Pay, Pay if it was not their issue. Imagine their huge surprise when they discovered that they'd given us a router, one they'd purchased from another company, that was not configured for their company! Hmmph!

There are wonderful things too, of course. I went to three Weinachstmarkts, yes three! And drank Gluhwein at each one. There is a medieval one in a castle in Lichtenberg that was a great deal of fun, one in a little town next to ours, and our teeny-tiny cute one a few blocks away. Each one was jam-packed, filled with crafts, food, and music. In Weilerbach, the choral group sang American pop from the 60s-70s, which was a bit of an anomaly.

Yesterday Lilli asked me to go with her to tend the flowers on her mother's grave. The small cemetery is full of carefully tended gardens cut into the middle of the large marble slabs. 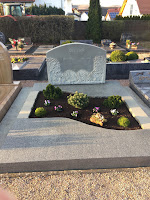 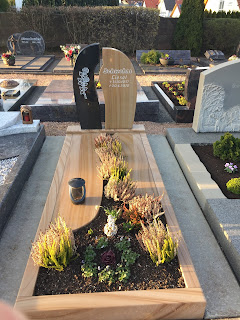 Fasching, like Mardi Gras, only it lasts longer, is a very big deal. In the larger cities, the costumes and parades are elaborate. Cologne, for example is known for their Fasching celebrations. Lilli and Karl attended the local gathering at the Burgerhalle. 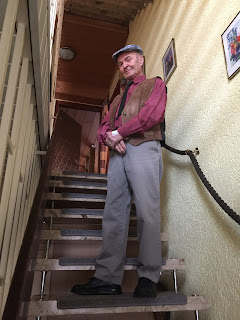 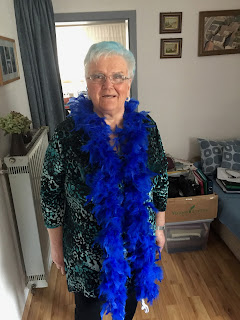 
One of my first excursions was a weekend trip to Paris, a little more than 1.5 hours away by train. Since my colleagues had never been, Maria was determined to see everything! After a 12-hour day and, according to my iPhone, 14 flights of stairs, up and down to the Metro, I almost felt ill. The next morning as my colleagues left early for the Louvre, I took my time, made my way to the Louvre for brunch, and enjoyed my coffee right in front of the I. M. Pei pyramid. I finally felt human. We traveled back home in the early evening.


Burgundy
A former colleague from Lithuania, living in Berlin, wanted to take a grand tour of Romanesque monasteries, convents, and churches in Burgundy. She planned the whole trip, chose the B&Bs/Hotels, and we took my car. I was excited about getting to see places that had figured so large in Hildegard of Bingen's correspondence but I wouldn't have thought of wandering around eastern France by myself. Thank goodness for Google maps, without which I would be lost on a daily basis. We made the rounds of the Romanesque Abbeys, monasteries, and cathedrals in the area within about 3 days ending our tour in Strasbourg at the wonderful Gothic cathedral in the center of the city.

After visiting this abbey for awhile, we drove to St. Rémy-Martin to find our B&B. The town is quite small and yet we drove around and around with our GPS telling us we were very close. There was no sign but for the warning of the dog--and there was no dog either. The owners live in Paris and open this guest house on the weekends.

At breakfast we met a charming lady whose English was excellent and had a lovely chat with her at breakfast the next morning.

Dinner that night was in a Michelin-recommended restaurant and, of course, it was excellent!

We did get to the huge Cathedral and monastery restoration in Cluny. The restoration work there will be ongoing for a very, very long time.

Overall, I am enjoying my time in Germany very much including the fact that getting back to the States to see family and friends takes half the time and money it did from Japan.

I confess that this much has already taken me a week and a half of writing and locating photos. I am going to post this and consider shorter posts, more frequently, in the future....I hope!
Posted by Geri at 4:37 PM